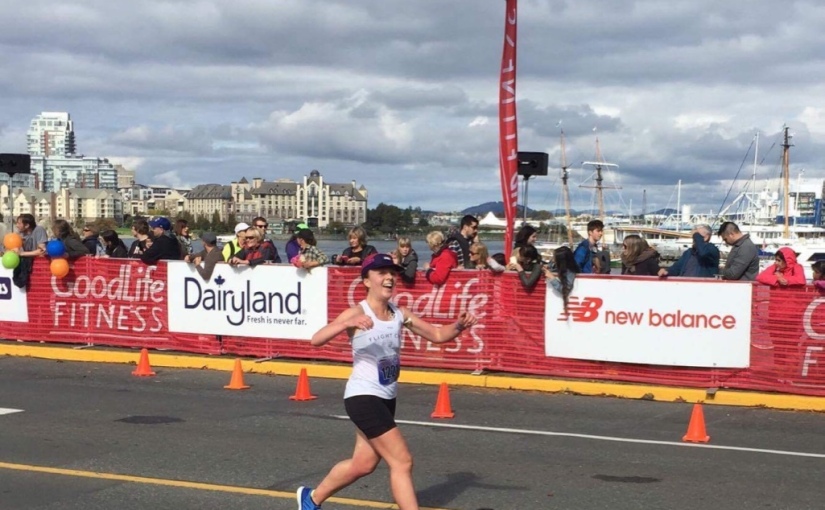 As many of you know, I have a bit of unfinished business with the marathon. While most people have said it doesn’t really matter, when it was announced that the Manchester Marathon was short by 380m for 3 years (including the time I ran it in 2015), my first thought was along the lines of ‘Oh for f**k sake, now I’m going to have to do another one’. Call me picky, but knowing that my result (and that of thousands of other runners) was no longer an ‘official’ time, I wanted to put a big fat tick and a line through the marathon.

As a leaving present, my lovely sister entered me into the Victoria Half Marathon, but after a few weeks of training with running friends who were entered for a variety of ultras and marathons through the autumn I decided that Victoria was going to be my redemption race. That makes it sound a lot more exciting than it was – there was definitely no training worthy of a Rocky-style montage, only a LOT of running; way more than last time. A lot of it was very early in the morning, some of it in weather hotter than I’m comfortable running in, some of it further than I would’ve liked, and a great deal of it on a less than ideal amount of sleep thanks to working two jobs, job hunting, house hunting, and trying to have some semblance of a social life as well.

Race day approached with some uncertainty on my part – a lot of people seemed to have a lot of faith that I could realistically (easily, even) achieve my goal of a sub-4hr marathon, but I wasn’t so sure. Racing isn’t my favourite. As discussed previously, the thought of paying for the privilege of running for a number of hours whilst feeling like crap the entire time isn’t something I enjoy but apparently that’s what you’re supposed to do.

Anywho, I arrived in Victoria on Saturday in torrential rain, slightly nervous, but excited to get going and get this marathon out of the way. My friend Devon is a Victoria marathon expert, having taken part in either the 8km, half, or full marathon every year for the last 14 years, so along with her friends, she was an excellent tour guide, fountain of knowledge and general queller of nerves. We had a quick spin around the expo to pick up our race numbers (apparently posting them out in advance isn’t a thing here), and a wander around town before going in search of carbs. Easier said than done when there’s eight of you the night before a big running race in town. Luckily it was third restaurant’s a charm, and because you can change as many things as you like on a menu here (seriously, you can basically just make up your own dish and no one cares) I got exactly what I wanted for dinner before heading back to my hostel for an early night.

I didn’t sleep well (my hostel days are now over for good), but there’s not a lot you can do at this point so after topping up the carbs with some porridge, I walked down to the start line with my friend John and his girlfriend Candice. There were only about 1,300 people taking part in this, so compared with Manchester where there were about 10,000 people, it was very quiet. Just before we started someone sang the Canadian National Anthem, which I didn’t recognise at all, and at 8.45 we were off.

My race tactic (ha!) was to start with the 4hr pacer and see how I felt after about 30km/20miles, but I ended up right behind the 3:55 pacer at the start so I figured I may as well see how it went. Victoria marathon makes no claim of being a flat course; it’s advertised as undulating, and I definitely felt the inclines in the first few kilometres of the race. We snaked around the inner suburbs of the city for a while, quite quietly really as there weren’t many spectators out on the course. About 1.5km in we went up a slight hill and a guy next to me was huffing and groaning like he was 40km in…I didn’t see him again after that. We went through a park where I saw a couple of people I know (I’m practically a local) who hadn’t seen me, so I shouted loudly at them, much to the surprise of the people running around me. We reached the ocean and saw the tail end of the people running the half marathon, plus the flags marked 38km for when we would come back around later in the race – it was quite tempting to jump the barrier, I won’t lie.

The course was very scenic, winding through lovely little suburbs and along the coast, but once we hit the half way mark, I was itching to reach the turnaround point at 25km where I knew it would feel like we were really on the way to the finish line. I felt OK for most of the first 30km – not amazing, but the pace felt comfortable and not like I was going to die. On the way up to the turnaround point we saw the leader coming back the other way, plus all of my very much faster friends who were steaming ahead. I even managed a couple of high-fives, which was fun.

Trying to drink water was interesting. They just had tiny paper cups about half full at each station, and I tried to use the technique of pinching the top together to make a funnel to drink from but this mainly resulted in a wet face and a coughing fit, so I ended up walking through most of the water stations just to make sure I had enough to drink. Despite the monsoon the previous day, it was sunny and quite warm by this time and dehydration was something I did not want to experience.

Inevitably at about 30km the race crazies took over my brain, I was suddenly sick of running with the group who had carried me for almost 3 hours (sorry guys) and I was desperate to finish. It took me about a kilometre to untangle my headphones but once I got the tunes going it was a party for one and I was into my own groove, singing out loud on occasion, much to the amusement of the volunteers and spectators. There is rarely a bad time for a bit of classic Phil Collins, and it’s definitely not 34km into a marathon. As 12.2km is a bit too far to sprint finish, I got quite tired and panicked a bit that I’d gone off too fast and was about to hit ‘the wall’ and have to crawl my way to the finish. Just when my brain was about to give up on me the 40km flag appeared and I was fairly confident that I could get by on adrenaline to the finish line.

At this point, a quick glance at my watch told me I was well within my sub-4 goal, and if I really sprinted for home I might possibly get under 3:50… I knocked that idea on the head fairly quickly though as my brain wasn’t quite up to calculating how fast I’d need to run, but it seemed quite a lot faster than I was going already, which was actually pretty fast for me.

The last few hundred metres were pretty emotional – I heard Devon screaming at me from the sidelines and I didn’t know whether to grin like a loon or cry like a baby when I saw the clock above me reading 3:50 (official time 3:50:58). My secret A goal was 3:52 (which my friend Becky set me on a bit of a whim/good faith a few months ago), and I still can’t quite believe that I beat that time too. I think I knew after Manchester that I could do more, but it’s kind of terrifying to put yourself out there with an ambitious goal and have the very real possibility of not achieving it if things don’t go to plan.

There was a veritable buffet of cookies, doughnuts and muffins at the finish line, but in a strange turn of events, all I took was a slice of orange and about 26 cups of water. I felt pretty ropey for the next couple of hours but managed to recover enough to force down a beer a little later, and luckily my appetite returned in time for a giant burger and a few more drinks later on. I also ate most of the food in British Columbia on Monday (Canadian Thanksgiving), although someone got to all the pumpkin pie before me as I trekked around about four supermarkets with no luck on the pie front.

For most of my running friends here, a sub-4hr marathon is a walk in the park, and so many times over the last few months of training I’ve convinced myself that I’m a slow runner, that I’m not as good as them, and that my goals were insignificant in comparison to what they are trying to achieve. Thankfully, the encouragement, support and then the congratulations I’ve had over the last few days have restored my faith somewhat that it doesn’t really matter how far or fast you go, it’s just about running and enjoying it, whatever the goal.

If you’re still reading now, well done! If you like stats and are on Strava, you can see my data from the race here. And to put into to context some of the incredible achievements of my running friends in Vancouver, here’s a quick summary…

See what I’m up against?!

Self-confessed fitness junkie and travel addict, revoking 'grown-up' life and embarking on a new adventure in Canada. Love to write, love to eat, love to run, love to explore - this is my place to document it all. View all posts by Clare in Canada

One thought on “Victoria Marathon: it was hard.”